What happened to the Mz Devious Dailymotion channel ?

The morning of January 21, 2015 — I woke up *bonus points for surviving another day in this cruel world*  reached for my iPhone to check my emails ( is it weird that I sleep with my phone under the pillow?). I start each day the same way since 2008 – calculating overnight clip sales.  This deciphers what type of mood I will be in for the rest of the day. No sales = don’t talk to me.  A few sales = don’t look at me until the Adderall has kicked in. Many sales = today will be a good day and I love you.

To my surprise, an email from the kind folk over at Dailymotion. Weird.. what do they want? Oh, okay I’ve been dumped for violating TOS.

I sift my thoughts for a moment to take account of the possible fucked up shit I might have inadvertently done to piss them off.

It wasn’t nudity. Though the overabundance of va-jayjay and peen on Dailymotion suggests that lady-bits ‘n’ tits are welcome there .  Plus they’re a French company –  in France nudity isn’t considered offensive, it’s just skin.

I’m positive that I wasn’t spamming or trolling since I don’t even bother responding to comments there. I simply upload and log out. 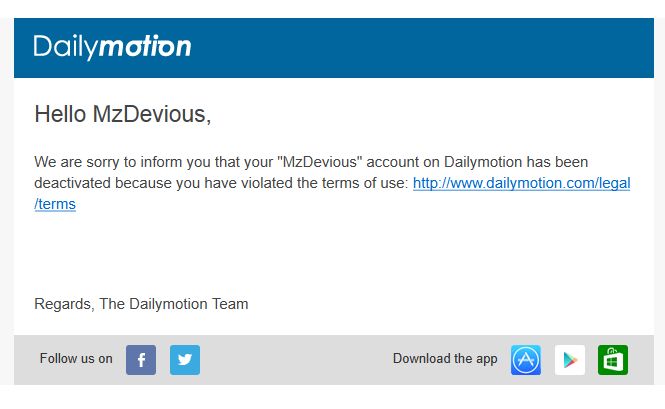 So why the fuh did they kick nice Mz Devious and her Dailymotion account to the curb?

Dailymotion was unable to provide a satisfactory reason, but from what I grasp they accused me of harassing site members.

I was trolling. Fo’ rizzle. Nobody likes a liar Dailymotion.  (It’s in the ‘Dear John’ letter ↓ below)

We are dumping you after five uneventful years and 6 million views .. because you a troll-ass-bitch.

I messaged DM and the response was nonchalant. Matter-of-fact ish “Oh — you were leaving rude comments. Bye Felicia”

I thought we were friends Dailymotion.  Especially since you never gave me the kind of grief that YouTube did.

I need detailed answers for EVERYTHING.  “Why” is the most overused word in my vocabulary.

You just don’t wipe out an account that’s in good standing, at least without being able to restore it. Would be nice to send people a WARNING.  For fuck’s sake, the recipient of a DMCA notice gets three strikes AND has the option to  file a counter-notice ( even when it’s obvious they’re at fault)  at least they’re given fair warning.

I haven’t logged in to DM in weeks . What gives? Did someone gain access to my account? Perhaps I’m a sleepwalker that trolls in my sleep.  Maybe my computer is infected and part of a zombie trolling botnet that prowls video sites. I make a mental note to run a malware/virus scan and change my passwords for everything, because I’m neurotic and that’s how we roll.

Surely DM could source the IP address of the offending party that bestowed its foul troll droppings on their digital yard.

I asked if it was possible to lookup recent login IP addresses, but was told my account and its history had been wiped. Poof be gone!  I don’t get it. Five years, 6 million account views and zero complaints.  That’s messed up.

I didn’t just lose a silly account, I lost search engine dominance and a chunk of potential income. This was a highly targeted, excellent converting source of traffic for my business.   I put a lot of effort into crafting longer than average clip trailers. Because yes, I do understand that not everyone can afford to buy my clips, so I don’t mind sharing a taste of content without giving away the farm. DM was also a method to keep searchers on MY property rather than support tube sites that generate ad revenue from our stolen content.

Dailymotion places adverts in videos & profile pages. Good for them, it’s how they pay the bills. More views = more money so I doubt they were tossing me for being a resource intensive, copyright infringing freeloader. At one point,  I received an invite to sign up for their partner program as soon as it was offered, but my request was denied. Later on, I found a handful of people uploading & monetizing my same promo clips using the Dailymotion partner program. Do you think they gave a crap? Nope.  They’d just remove the clip and leave the account. Same with my impersonator/stalker dude. His account is still up (using my pics, name, but with links to his affiliate offers) and yes I reported it. 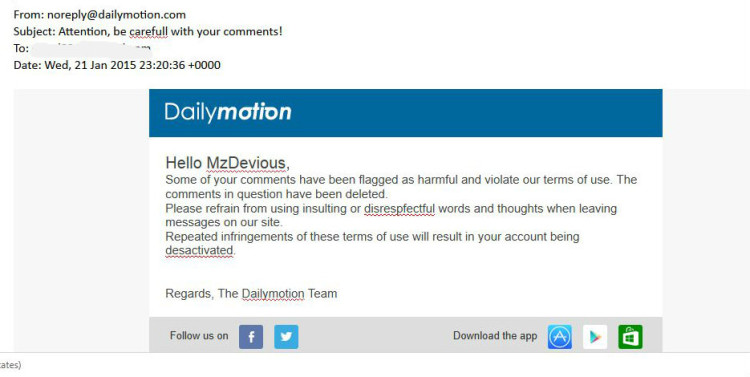 I thought that ↑  was a phishing email. One wouldn’t expect to find so many typos in an email coming from Dailymotion.

But, it was from them.  I checked the source code and it matched up with their previous messages.

I know many of you received ” Korean Biz Journal” and a few other phishing emails. Hopefully you did not click on anything. 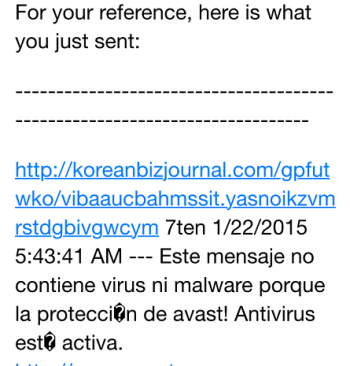 So that’s what happened to my Dailymotion account. Mind-boggling.

Previous article So Much Ass to Worship
October 27, 2015

Next article Mz Devious Biceps vs. your Wife’s Biceps
August 6, 2015