Well it Did: SWOLE Juice in the top 50

If I knew this was going to be such a hit, I would have waited until the replacement bulb came for my light kit. Yet, despite the bad lighting ‘Schoolgirl Drinks the Growth Elixir’ has made it’s way into the top 50 at clips4sale in under a day and is now at # 17

CHECK OUT MY CLIP STUDIO 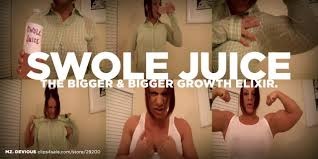 My friends at AREA ORION made this neato photo montage

and I LOVES IT
School Girl Drinks the Growth Elixir

Schoolgirl Danni was tired of being little. She wanted nothing more than to be HUGE. She finds out that some of the guys on the football team drink ‘Swole Juice” which makes them more aggressive and assists with adding muscle. She take a bottle of this stuff home, turns on the camera to record what happens for scientific purposes ( because she’s a nerd ) Instantly Danni feels it kick in. Soon after, her shirt starts to feel tight … biceps growing before her eyes, and her shirt begins tearing. SHE GULPS DOWN SOME MORE AND IS GROWING RAPIDLY! BIGGER BIGGER ! She shreds out of the shirt, tearing it to pieces, shouting with new found confidence ” I’M A FUCKING BEAS.T.. I’M A B.EAST , I’M HUGE” and flexes while drinking the last bit of this magical juice. Danni’s pecs start bouncing – they’re out if control! SWOLE JUICE really DOES work. ( clip categories- shirt ripping , FMG , muscle control, growth fetish )

Next article CUSTOMS are not DEMANDS
January 4, 2012